There are numerous tours which can be enjoyed in the area for those passionate about wine, history, good food and nature among the medieval and renaissance hamlets.

A few kilometres in distance from the agrotourism one can visit places such as Pienza, Monticchiello, Montefollonico, San Quirico, Bagno Vignoni, Cortona, Montalcino and Siena noted also for its excellent food and wine. 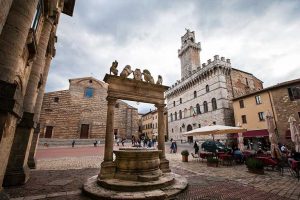 Pearl of the Tuscan 1500’s between the Val d’Chiana and the Val d’Orcia, with its beauty conserved intact. Its historic centre developed along main street, and which is 1.5km from the San Gallo Agrotourism, leads up to the Piazza Grande, with the Cathedral from the 1600’s with its incomplete facade and the Town Hall from the 1400’s; all around it are renaissance places. A few steps from the square is the Civil Museum and Art Gallery Crociani www.museocivicomontepulciano.it which has on display sculpture and painting masterpieces from the Sienese school of the XIV century, among which is a portrait recently attributed to Caravaggio.
In the valley below the town, just before reaching our agrotourism, rises the elegant structure of the Tempio of San Biagio. A renaissance work realized by the architect Antonio da Sangallo the Elder, and from which our agrotourism takes its name.
The name of Montepulciano resounds not only for its beauty but also for its wine. Vino Nobile di Montepulciano and it has been the first Italian red wine to be placed on the market with the DOCG quality seal. 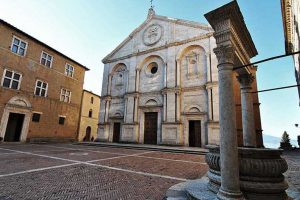 It is famous as the city of Pope Piccolomini Pius II, who promoted and created it as one of the most admirable examples of urban renaissance planning. For its artistic beauty and history, in 1996 UNESCDO declared it a World Heritage Site. It is found in the marvellous and green Val d’Orcia a few kilometres from the centre of San Quirico d’Orcia.

The city until 1462 was a small hamlet called Corsignano. The event that changed its fate was the birth in 1405 of Enea Silvio Piccolomini who became Pope Pius II. While on a pontifical journey towards Mantova that took him through the place of his birth, the deterioration that he found made him decide to build over the ancient hamlet, entrusting the project to the architect Bernardo Rossellino: a construction that lasted around four years and brought to light a harmonious city with a typical fourteenth century aspect.

The grand Palazzo Borgia building faces onto the Piazza Pius II is host to the Diocesan Museum. palazzoborgia.it

Pienza is famous also for its typical cheese, Pecorino di Pienza, and hosts towards the end of August a cheese fair. 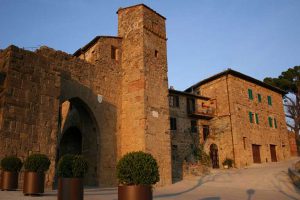 Monticchiello is an extraordinarily fascinating hamlet, well looked after, 8km from Pienza in which reside around 200 people. It is a destination to add into your tour of the Val d’Orcia, easy to reach and for those who hope to be rewarded with one of the most beautiful sunsets they have ever seen.

The origins of Monticchiello were lost to the Etruscan-Roman era

In the era just prior to 1000 Monticchiello was a fortified hamlet.

For those passionate about gravel roads from Montepulciano you can reach Monticchiello by an alternative route. From the Agrotourism pass the Tempio di San Biagio and the avenue with cypresses, turn right at the crossroads and then left after the petrol station along Via San Bartolomeo. Continue straight on to arrive at Monticchiello passing through breath taking panoramas.

We advise a visit in the late afternoon. Monticchiello is a small and doesn’t need a lot of time, stop at the benches to enjoy the sunset and then have a beautiful dinner at one of the excellent restaurants.

It is famous for its “Teatro povero” (it has become one of the principal cultural institutions of the area click for the news section). 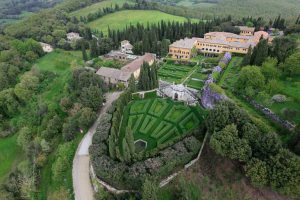 Only 9km from Monticchiello, you can admire the beauty of the gardens of La Foce.

When Antonio and Iris Origo bought the estate of La Foce they called on the English architect Cecil Pinsent – to restore the principal buildings and create a large garden. The last was conceived to enhance the renaissance house and expand the spectacular view over the Val d’Orcia and Mt. Amiata. The harmony between the buildings, garden and nature make La Foce an ideal example of the architectural evolution and culture of Tuscany in the XX century.

The house is surrounded by a formal Italian garden divided into geometric ‘rooms’ by box-wood hedges, with lemon trees in terracotta pots. The travertine stairs lead to the rose garden and a pergola covered by wisteria and bordered by hedges of lavender.

Terraced slopes climb gently up the hill, where cherry, pine and cypress trees grow among the wild broom, thyme and rosemary, and the long the avenue of cypresses lead to a stone statue from the XVII century. A path crosses the wood and connects the garden with the family cemetery, considered one of Pinset’s best creations. 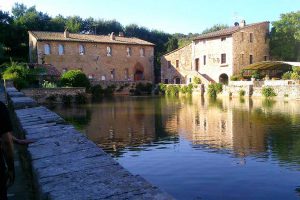 Bagno Vignoni is a small hamlet inside the Nartural Artistic Park of the Val d’Orcia, 30km from Montepulciano. Thanks to its proximity to the via Francigena – the Pilgrims’ Way, the waters that flow in this place have been used since the Roman era for thermal purposes.

The centre of the hamlet has developed around an extraordinary rectangle pool that collects the thermal waters, dating back to the XVI century when, flowed from the volcanic soil, the waters of the original thermal spring. A source that continues towards a sharp slope of the Park of the Mills which in the past worked the millstones for grinding cereals.

Its structure consists of a singular type of urban planning because the inns, the homes and the church have developed around the pool. The conformation assumes that the position as such of the pool are the functions are of those normally of a principal town square.

The atmosphere of Bagno Vignoni is very particular, the hot steam that is released in the big square of the source makes it magic. It seems to immerge us in a world divorced from our time.

In the Bagno Vignoni spa in the past famous historical figure came: St. Catherine of Siena, Pope Pius II and Lorenzo the Magnificent. In 1982 the Russian director Andrej Tarkovskij used it as a set for various scenes for the film Nostalghia, which was awarded the following year a prize at the Cannes Film Festival: recalling the impact of the place, other important films have used it over the years. 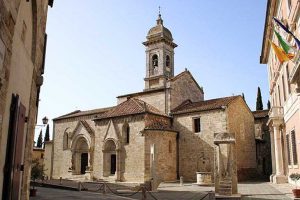 24km from Montepulciano the beautiful hamlet of San Quirico d’Orcia was constructed on top of a small hill, above the remains of the antique village of Osenna half way between Pienza and Bagno Vignoni.
From its elevated position it offers breathtaking views of the typical landscape of the Val d’Orcia.

To visit is the Horti Leonini gardens, dating back to1581, which took their name from the owner Diomede Leoni, to whom Francesco I de’ Medici donated the land on which they stand. They still conserve the original structure and represent a classical model of an Italian garden, used several times as a model in the successive centuries. The Horti Leonini gardens, from 1975, are the property of the Municipality of San Quirico d’Orcia open daily to the public. Free entrance.

Within the walls is the Church of the Collegiate with its three Romanesque doors, the Palazzo Chigi, the Church of San Francesco and a Madonna by Andrea Della Robbia and the small and fascinating Church of Santa Maria dell’Assunta.